While designing the landscape of the area, we strove to continue and complete the image the Millenáris park currently displays in both function, inner workings and its street network. We would build an underground garage underneath the lawn in front of the Melegpörgető (disused industrial building), we would lead the traffic of Fény street underground. The parking lot of the office building of the Millenáris on Fény street, the parking building of Mammut 2 shopping centre and the underground garage we have designed could be reached through this underground passage. The road on the surface would be used as a service road only, further strengthening the connection between Millenáris Park and the planning area of the competition. We have extended the road starting from Marczibányi square, running straight towards Fény street to Margit boulevard; similar to Millenáris Park we have linked the buildings we designed or utilized along this road. The other important road has a more meandering shape, sectioned by greater or lesser expansions into squares. It arches from the intersection of Kis Rókus street and Margit boulevard to the entrances of the ‘D’ and ‘B’ industrial halls. 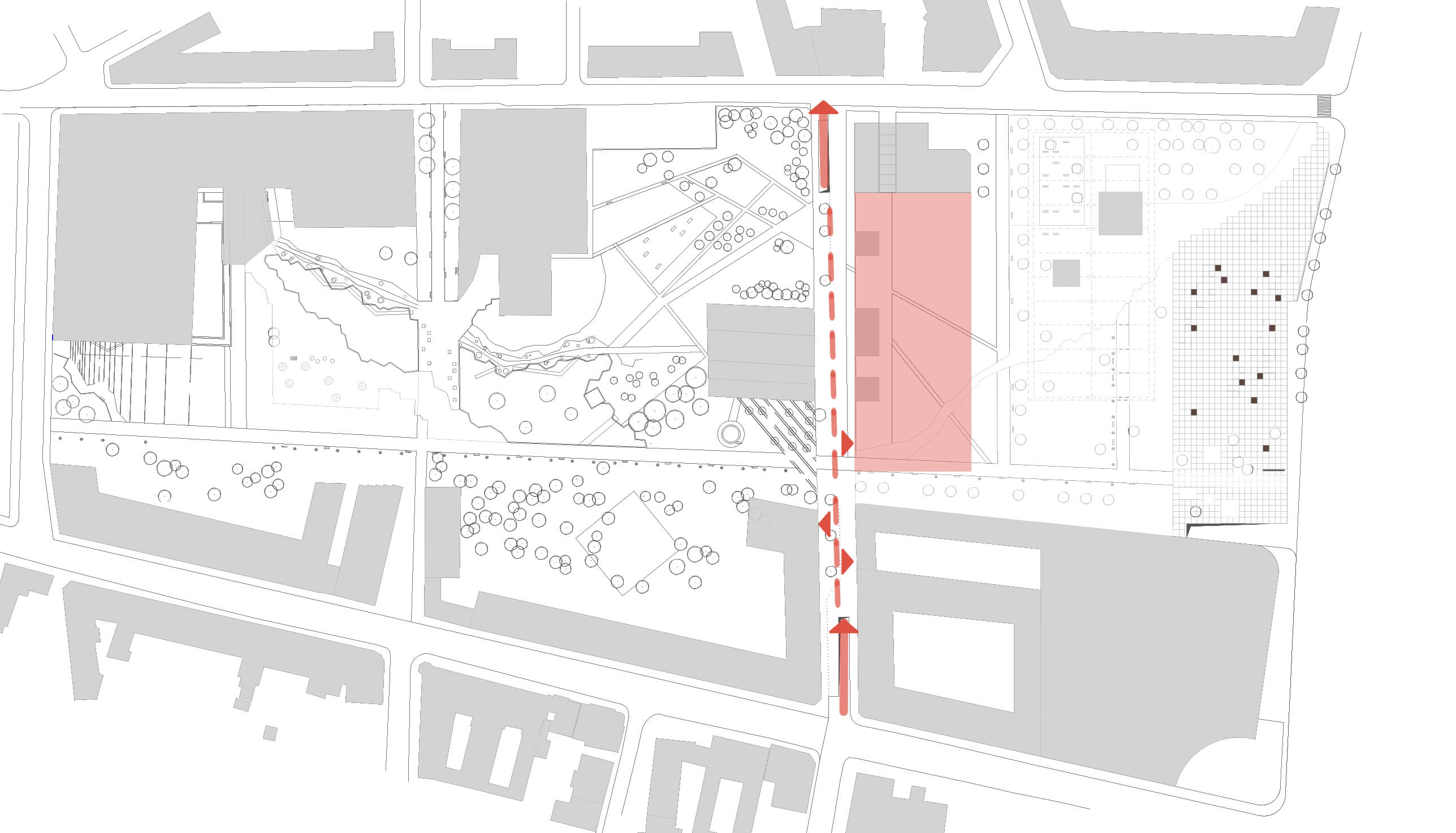 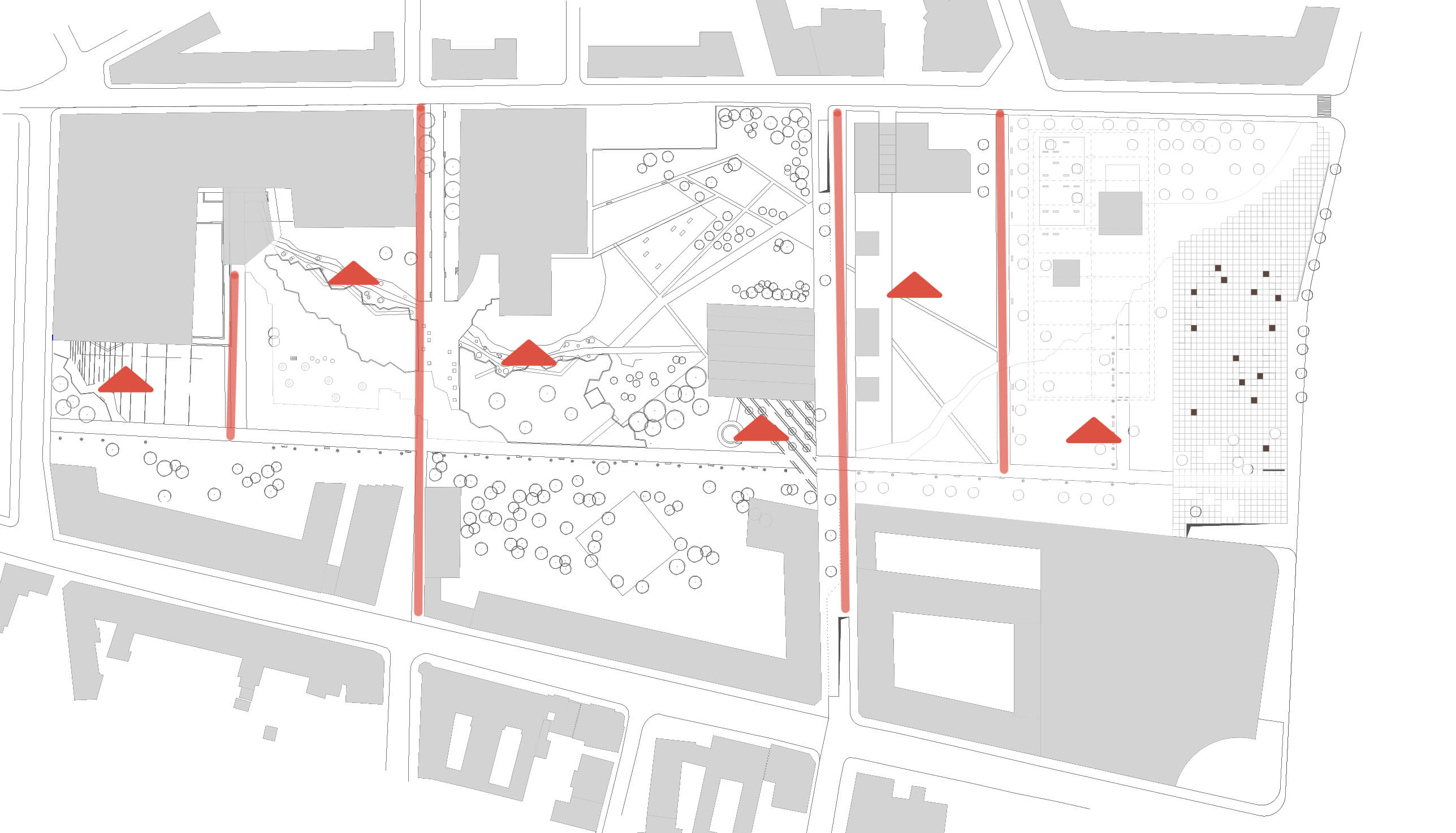 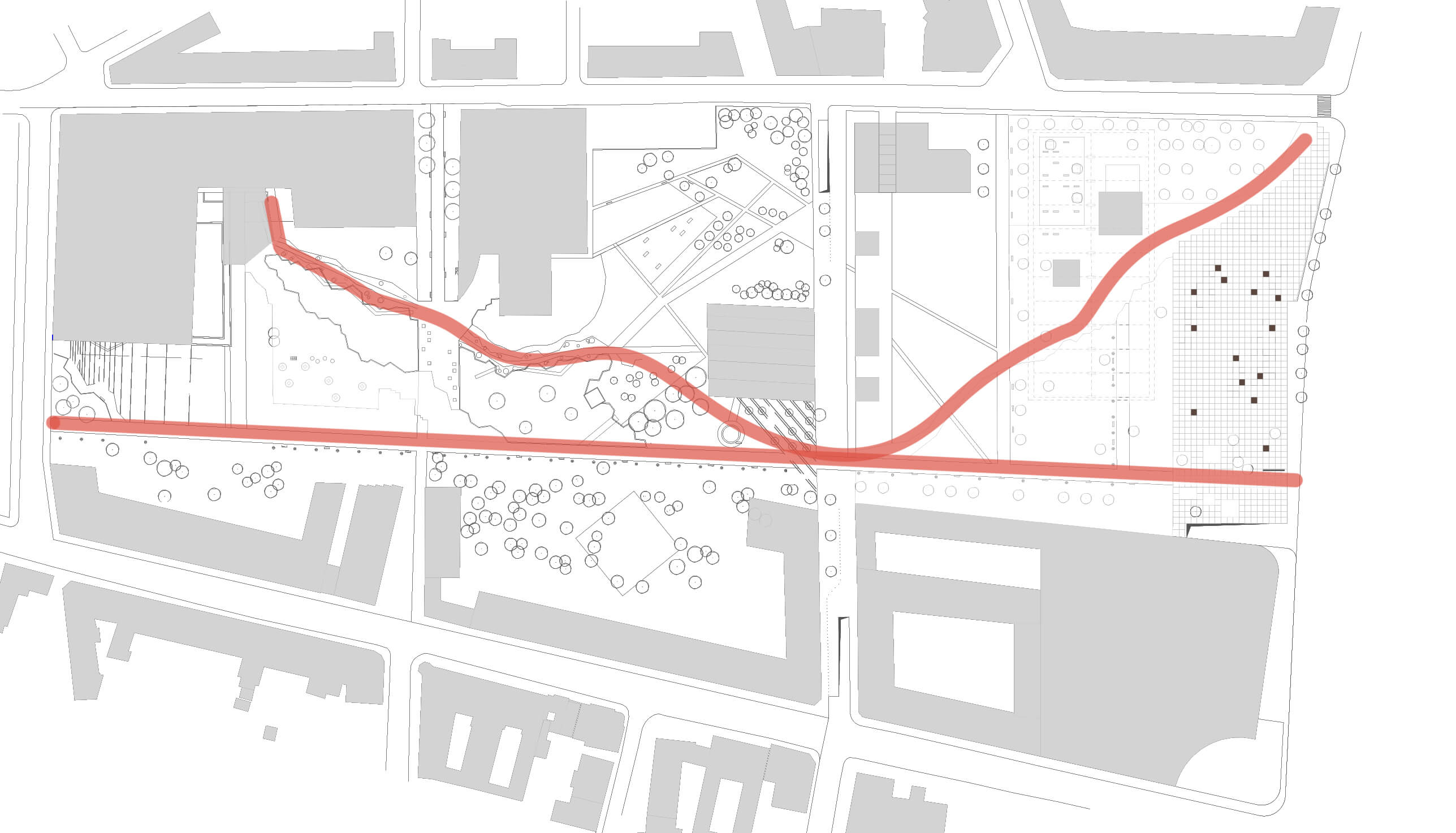 We have designed a city park with fountains scattered across as the start of the park between Margit boulevard and the ‘M’ industrial hall. We imagine the ‘M’ industrial hall as a partly covered, partly open-space building. From towards its main entrance (South façade) it is nearly fully open, while from its three other sides we only open the façade up on its lower third. There is one closed unit within the hall where a restaurant can also be found.

We have placed a new building next to the north-western corner of the Melegpörgető (disused industrial building), where we designed offices which can be rented. The utilization of the old building is varied, even whole floors could be rented by extensions. It can function as an action space, architectural museum, studio building, etc., independently from the rented spaces, thus making the environment of the office units interesting. We have designed a continuous, extensive, flat lawn where team games could also be held. We would place smaller, pavilion-like buildings by Fény street, the functions connecting to the park, shops and the entrance to the underground garage would also be here. 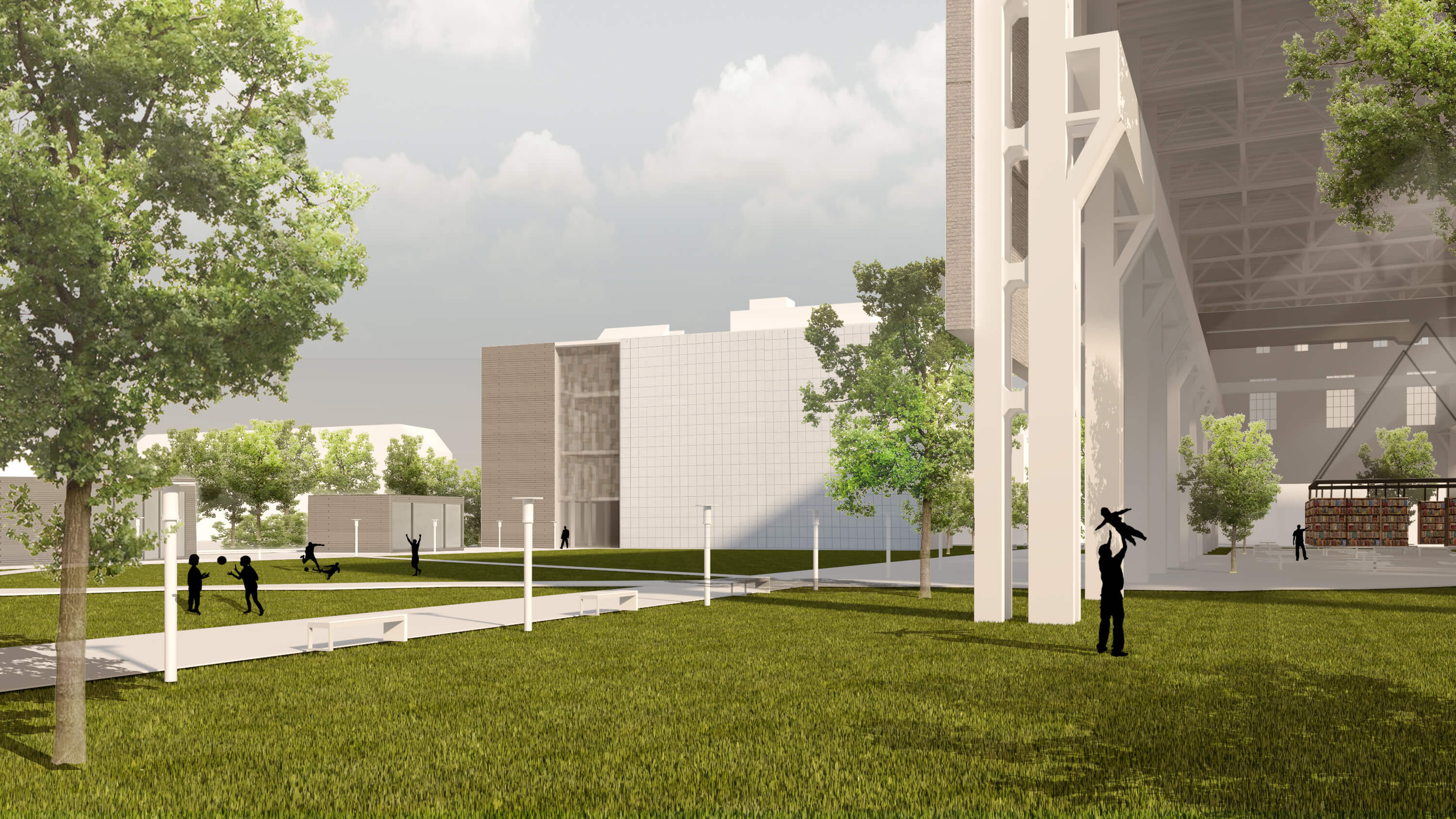 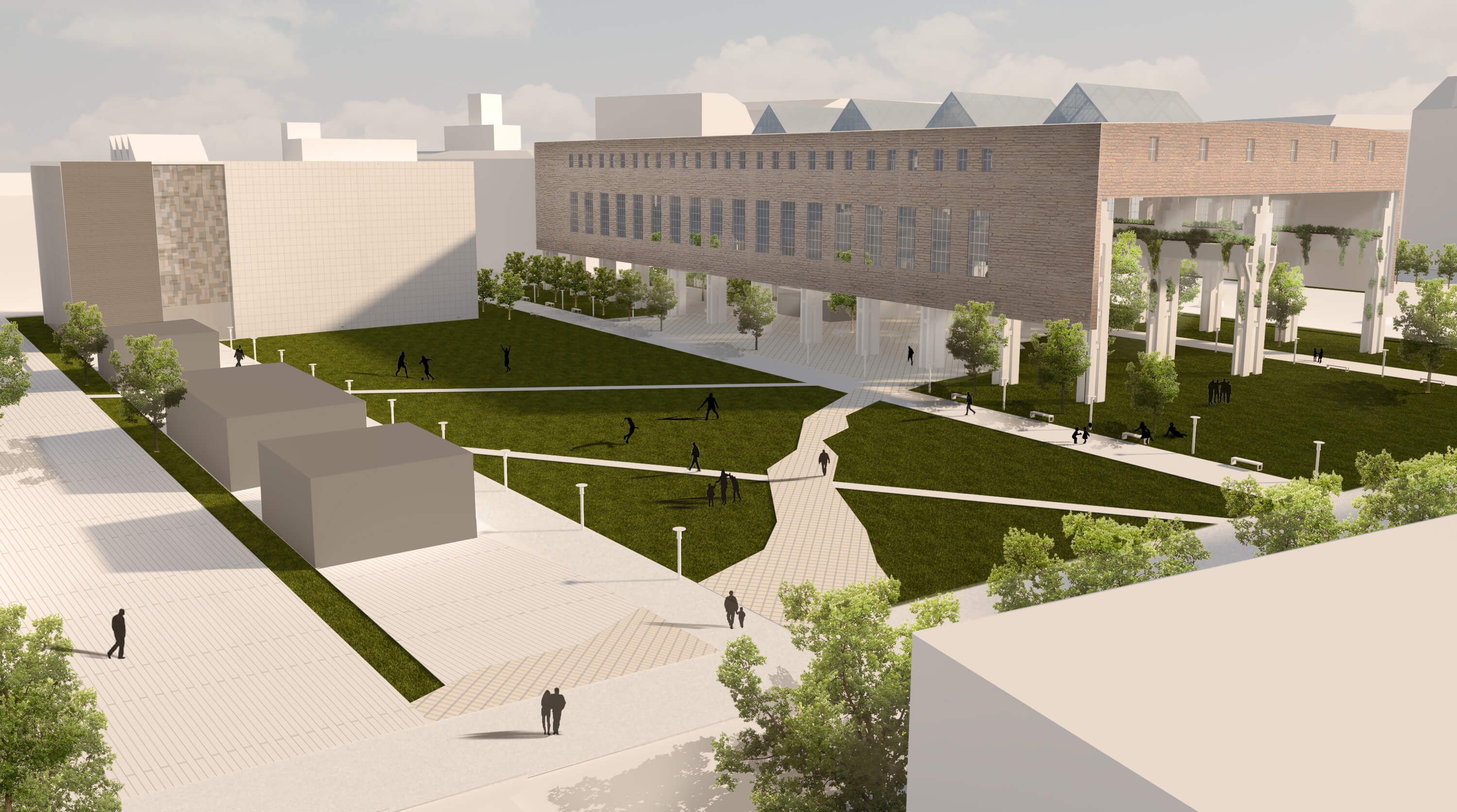