The design area has special features in terms of its built and natural environment. However, in addition to the historical significance of the Castle, its picturesque environment and the natural beauty of the Old Lake, the current design of the area is functionally, architecturally and technically unsatisfactory. Our goal is to create spaces that live together with the historical monument, provide a worthy arrival, and serve today’s needs, both inside and outside the buildings, so that the area, as the “front gate of the Tata Castle”, can be used as a loved place for both residents and for visitors. 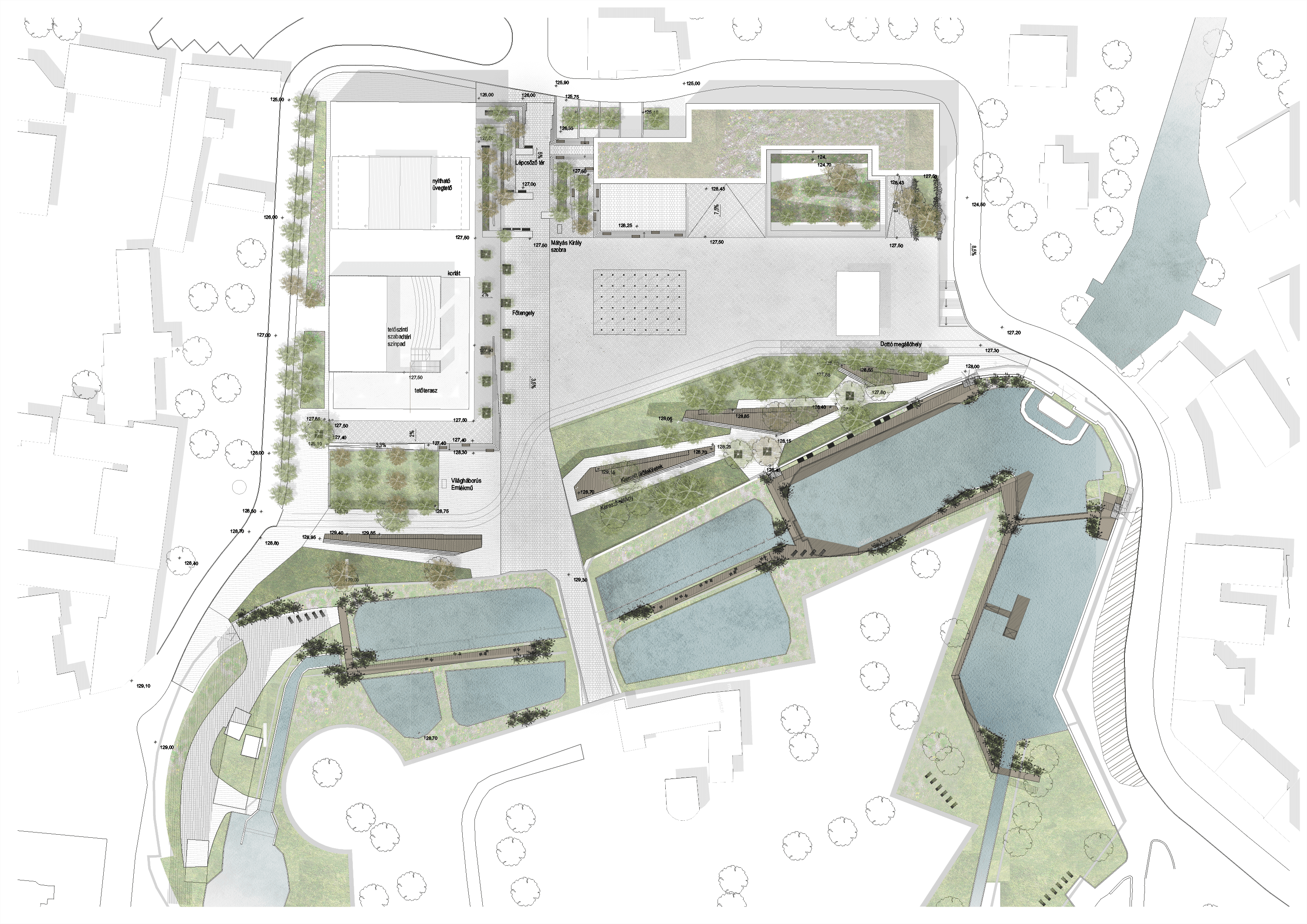 In public spaces, it can be observed that people prefer to stay on the edge of the squares, the whole space is visible, so it is an exciting, yet safe area, as they can “surprise” people from fewer places. Thus, how attractive the given square is, how much time passers-by spend on it, largely depends on the design of its borders. Currently, the space is surrounded by blind facades. There is only a minimal visual connection between the buildings and the square. One of the basics of the concept of our plan is to create active facades on the border of the square.

The square is currently bordered by the House of Culture, the former Clinic and the Castle Wall, however, the relatively large areas between the three buildings and structures are undefined. In our plan the walls of the space were defined with delicate gestures: the house of culture was expanded with two rasters in the direction of the Castle, and a block of trees was placed on the remaining area. We have designed a lightweight pavilion for the northeastern end of the square, which, in addition to forming a soft border at the end of the area, can serve the functions of the square both in everyday life and for events. 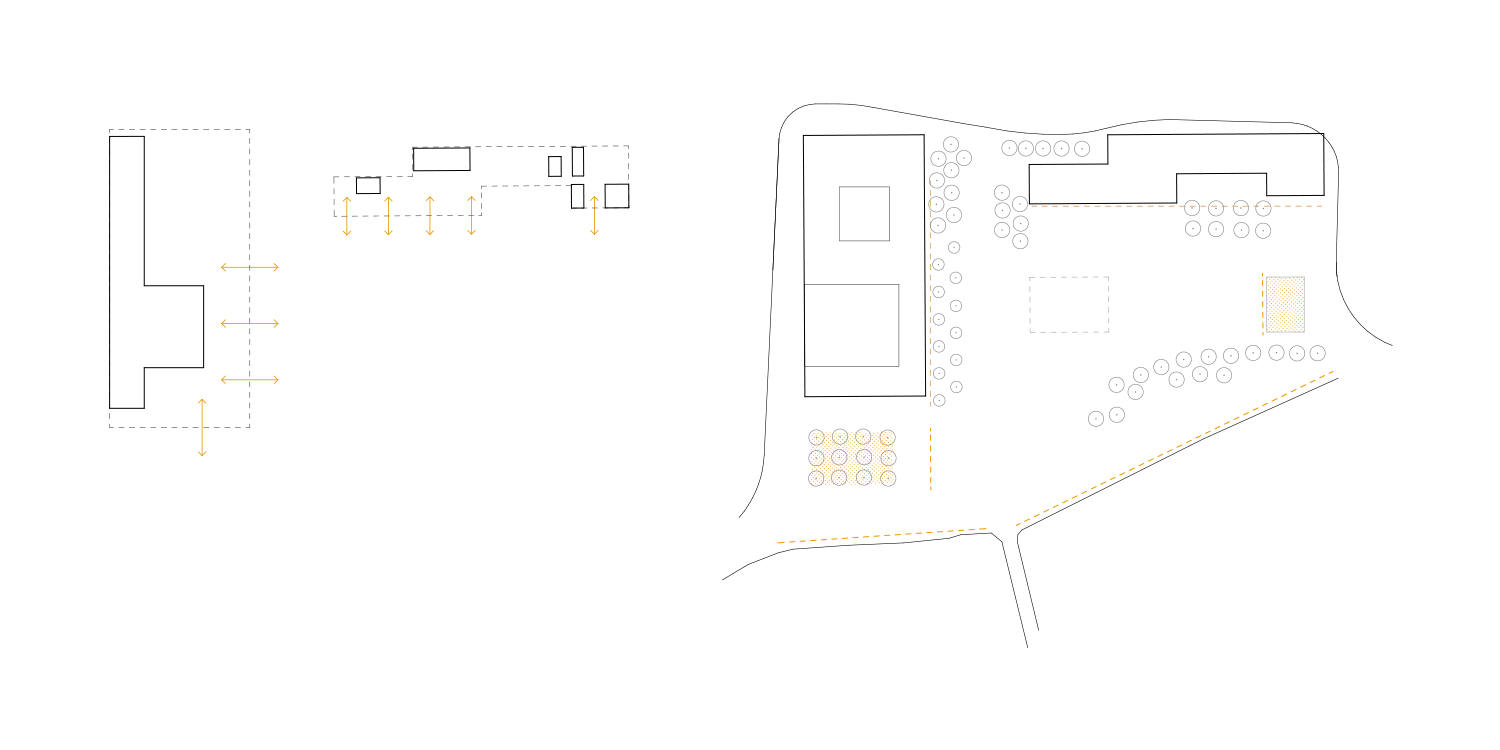 The current design of the Castle and the Castle Square does not represent the standard and quality of space that its special environment and function would require, therefore we created an expansion of the House of Culture towards the castle, with a generous, two-level high teather forecourt.

According to the role of the House of Culture, it is a cultural and leisure center, a public building accessible to many, and accordingly our plan is characterized by a high degree of openness, transparency, strong visual and physical connections, both in terms of individual spaces and environmental connections.

The inner atrium was covered with an openable glass roof. The atrium space is the heart of the event center, which can be used in conjunction with the multifunctional spaces around it, but can also form an interior closed world with glass walls and curtains. In everyday life, the consumer space of the café can expand here, while in the case of events it is an area that can be shaped and arranged in various ways.

We have modified the geometry of the top of the theater not only for aesthetic reasons, but rather to make it usable. In our plan, facing the castle and the square, there will be an event terrace, to which – repeating the auditorium upwards – there will also be an outdoor auditorium and stage. We believe that in addition to the opportunities provided by outdoor events, the way of life in society – staying in a closed, stimulus-free environment all day – is becoming more and more important again. In this protected and very special environment, events and performances can become colorful, special elements of the leisure center’s program.

The built elements of the castle and its surroundings, the castle walls, the characteristic building material of the castle building is stone. We designed a brick covering of the same color as the stones of the castle on the outer colonnade and on the back – northwest – wall of the house of culture. Behind the brick cladding, the transparent façade opens the interior to the outside world. Between the defining horizontal planes of the slabs, the theater is embedded as a solid block. Its surface is a perforated metal plate, which at the roof level encloses the contour of the outdoor performance space as a membrane. The ground floor of the former clinic is open and transparent, here the facades typically have a glass surface, which is divided by brick strips running in front of the columns. 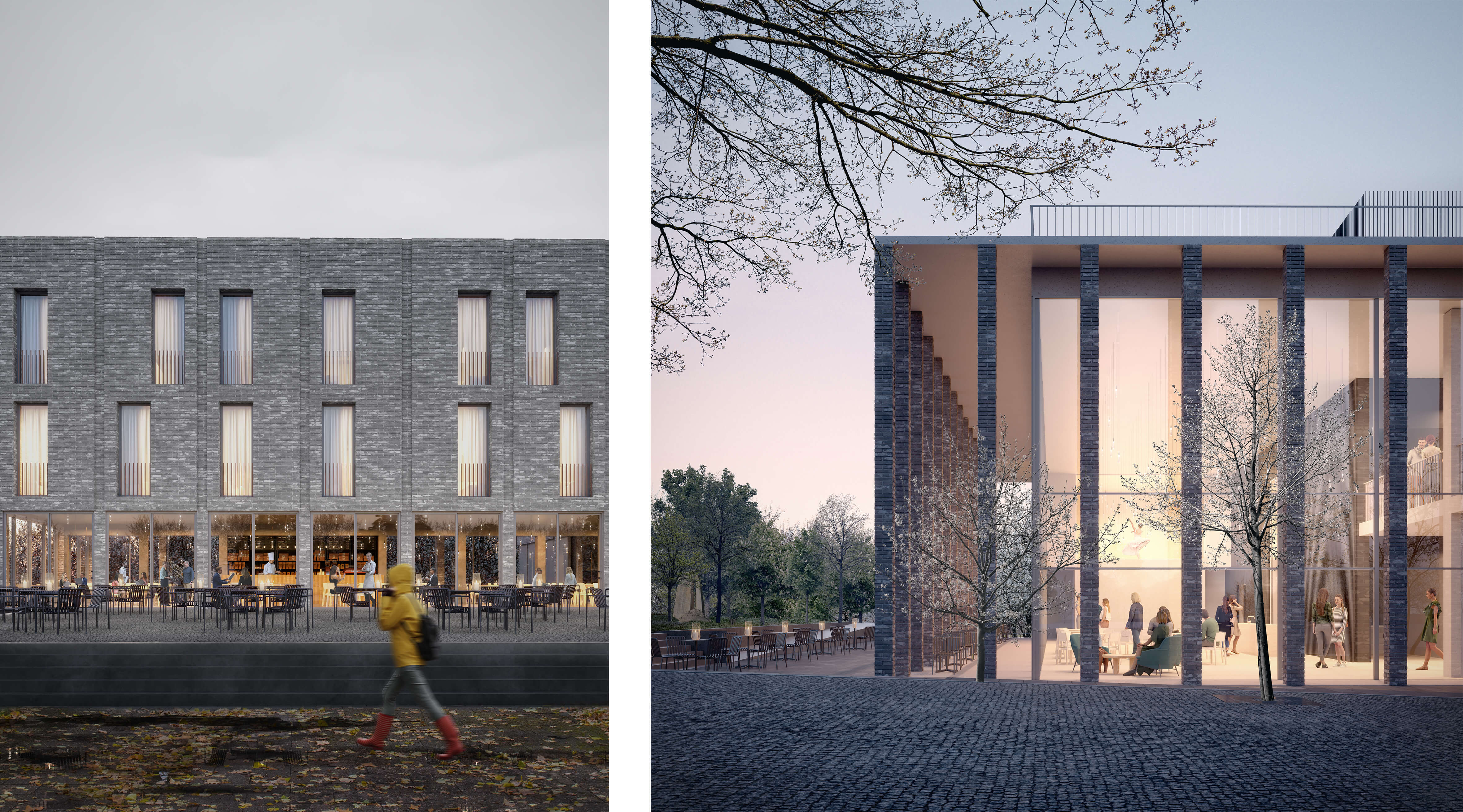