The historicist building with neo-baroque architecture, well-preserved, well-proportioned, richly detailed facades, interiors and garden represent a clear value. Our interventions are aimed at creating a contemporary community building, preserving the original character, atmosphere, spaces and details of the building. 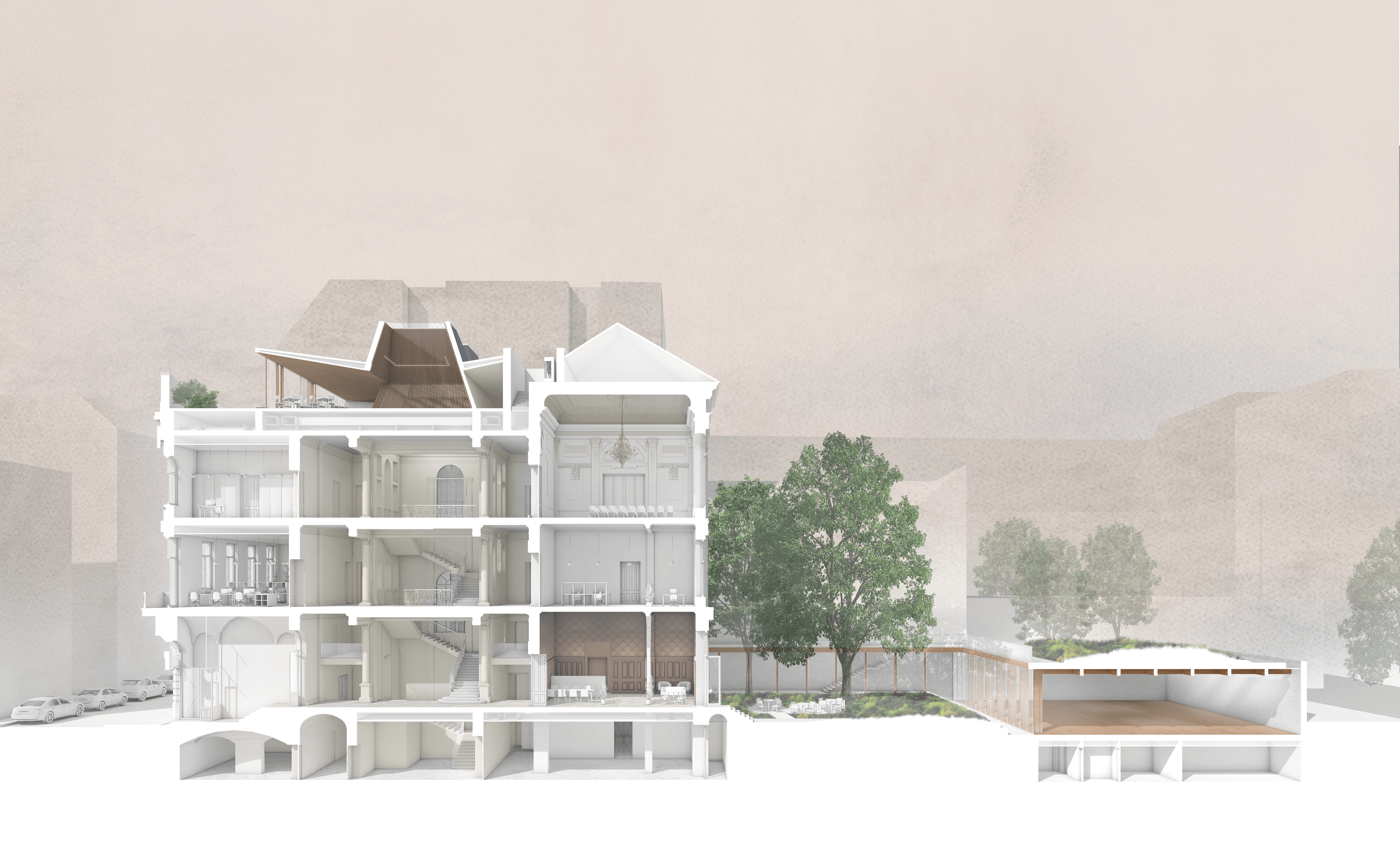 The facades of the building are arguably valuable elements to be preserved. However, they create basically closed, inaccessible walls towards both the street and the garden, which contradicts the purpose and message of the building, an important element of which is the role of the community. In our plan  we opened the street facade on the ground floor and the organically connected mezzanine level by filling the existing opening frames with glass surfaces. This does not change the overall look and detail of the building’s façade, but it does provide an insight into the events taking place inside, thus making the house much more open. Behind the large glass surfaces, we have created bustling, exciting spaces – a co-working office and an exhibition space – which make the building’s community purpose, educational and cultural role visible on the streets. 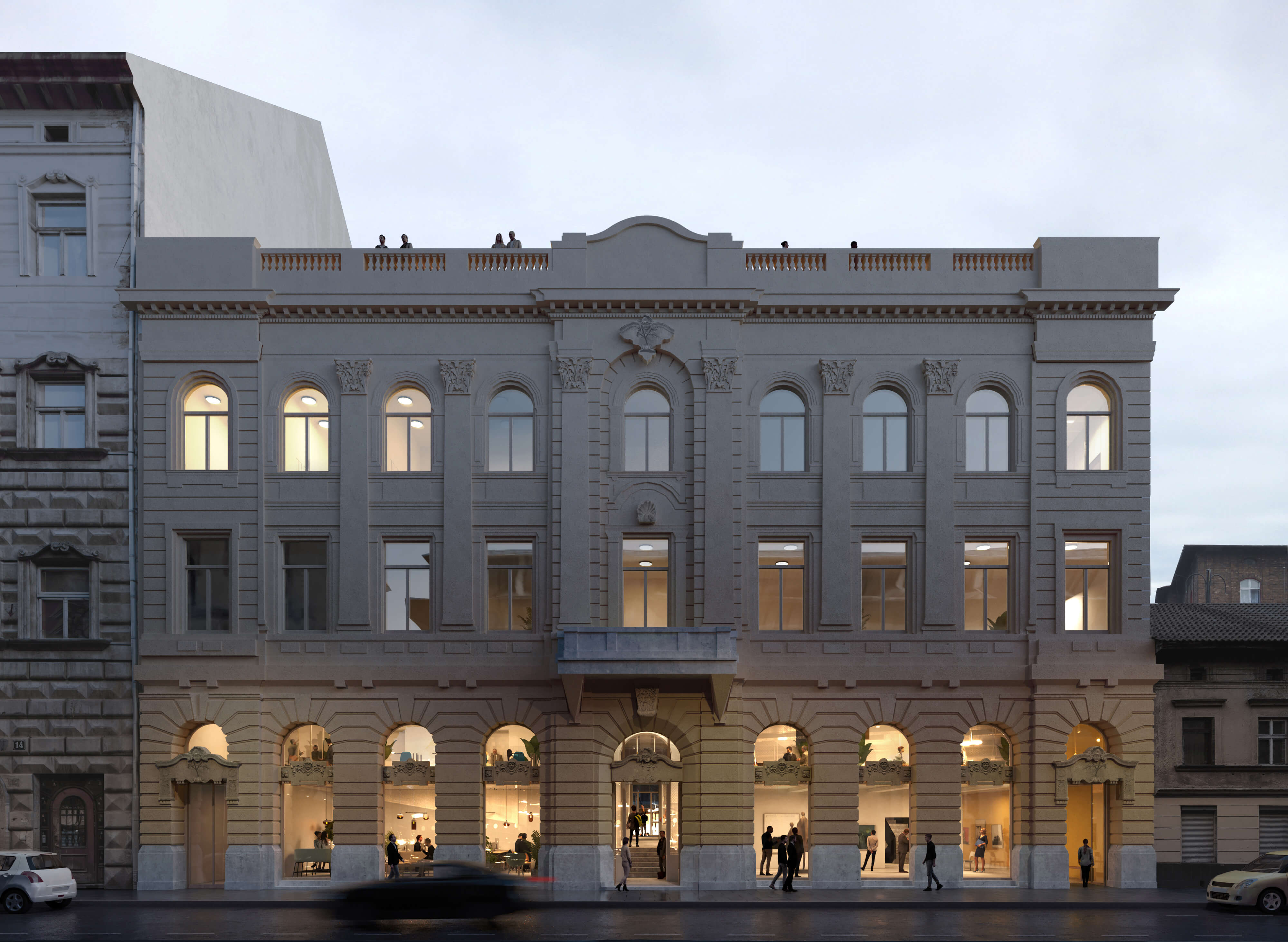 To the north of the central traffic core – the area defined by the stairs and the inner courtyard – we placed a closed array of service functions, while to the south we connected the inner courtyard and the traffic areas with more public, communal spaces. We have created a community space for more informal meetings. The connection between the spaces of the same functions on the mezzanine, ground floor and basement level is strong, we have made new connections in several places between them. 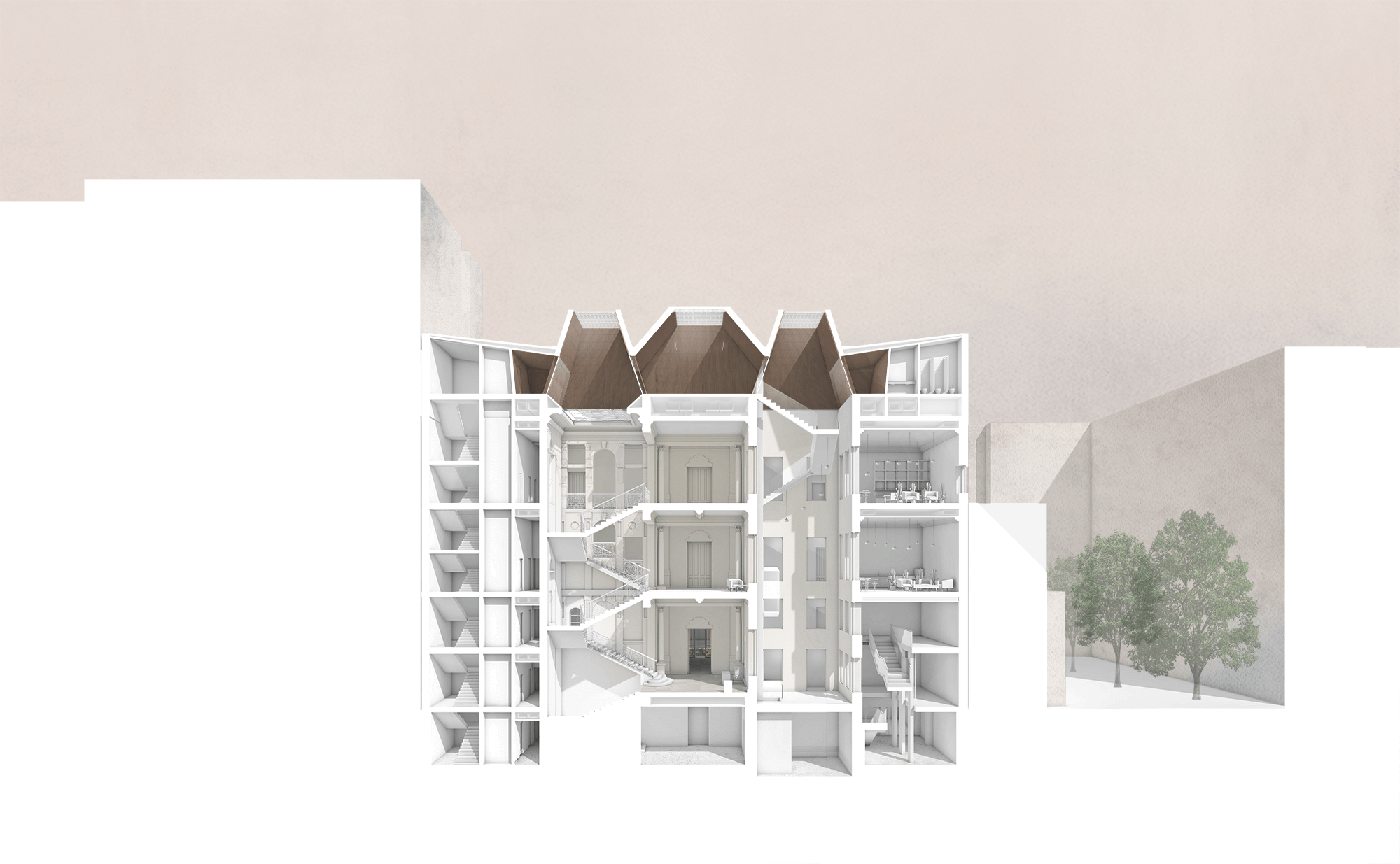 Opening the garden is a conceptual issue for our plan. It can also be seen in the old photographs, that the courtyard ended with a covered-open pavilion. The large contiguous space of the event space in our plan was placed on the site of the pavilion, at the end of the plot. The pavilion-like part of the building is separated from the garden only by a glass wall and a colonnade. The large hall is connected to the main building by a closed corridor on the south side and an open corridor on the north side. The roof of the parts of the building planned for the yard is largely a green roof, which can be reached from both the mezzanine level of the building and the yard. The upper courtyards represent a more open character, while the lower courtyard is a closed, intimate world, an inner, sheltered oasis in the center of the city. 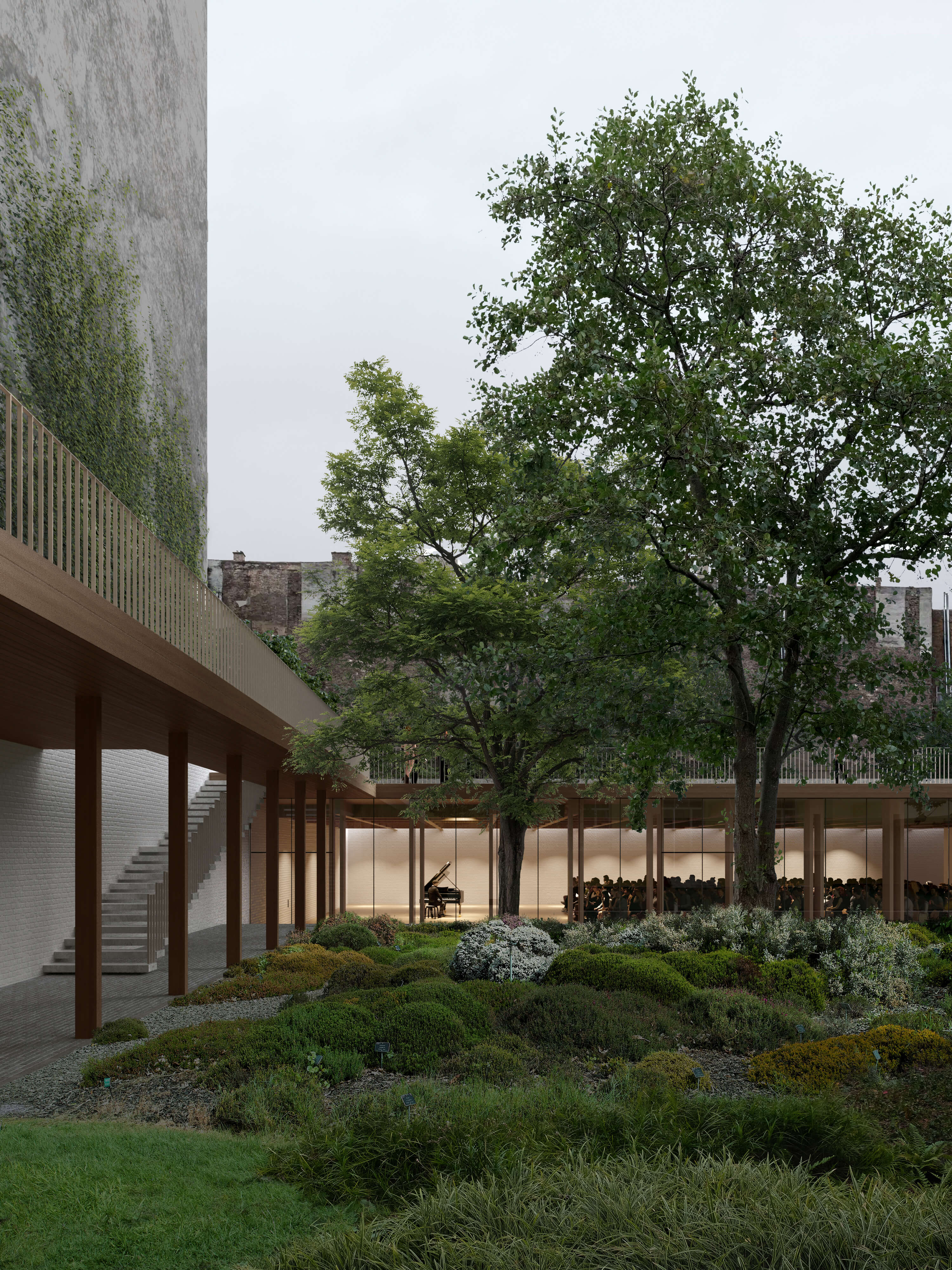 The inspiration of the roof formation is the monumental facade and the current geometry.
From the street and garden facade, the character of the building does not change, the perceptible facade structures are preserved. The geometry of the new roof sections is organized by inner courtyards: following the functional layout and axial construction, the roof in our plan is symmetrical, the main elements of which are the main staircase and the illuminating pyramids extending over the inner courtyard. Between the two rooftop pyramids, a third designates the point of arrival of the level, the restaurant reception area. 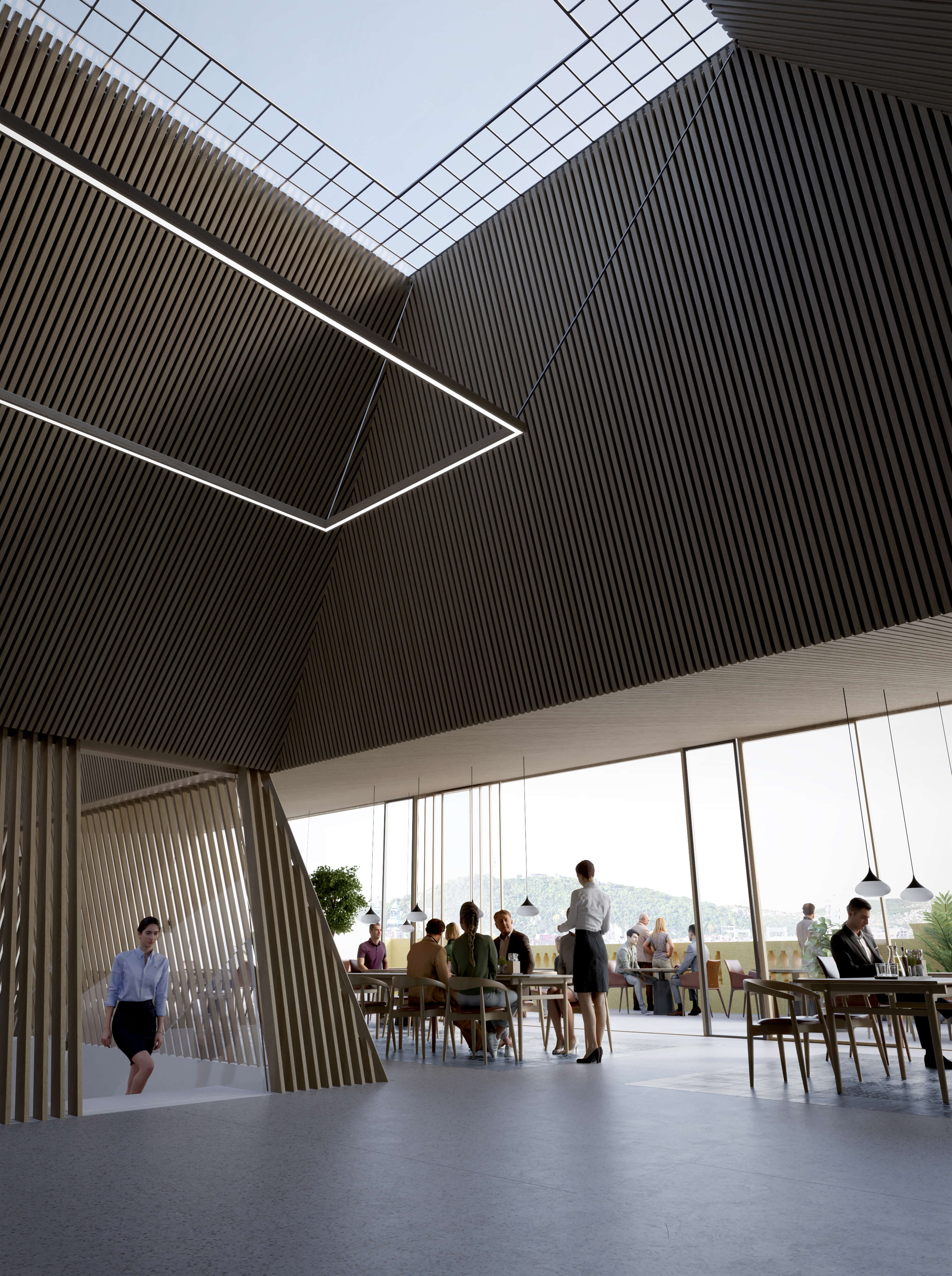